Power Levels Of Superheroes In One Punch Man

In the world of One Punch Man, superheroes are individuals who fight for justice against all the dangers of the world. They also protect innocent civilians from all harm against natural disasters, Mystery Creatures, Villains and other threats. Most heroes are registered with the Hero Association and are divided into four classes: From lowest to highest, there is C-Class, B-Class, A-Class and S-Class. Separate rankings are numbered.

In a normal situation, a hero that can handle the level of danger to the maximum level is a Demon, with the level of Dragon or God, it takes a certain amount of heroes to deal with.

The superheroes in One Punch Man are divided into 4 classes:

Class C: This is the group with the most superheroes, about 390 heroes, they are the weakest in the Hero Association.To continue to be recognized as heroes, heroes in class C must have at least one hero action per week otherwise will be deleted Hero Register. 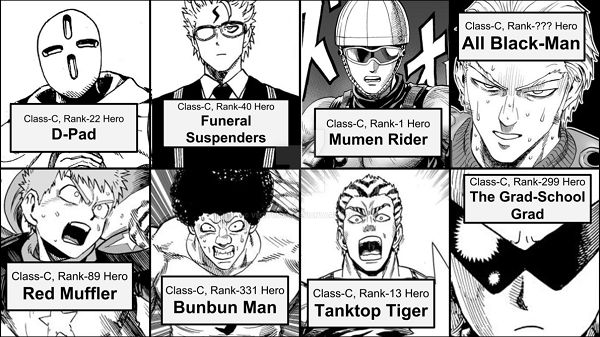 Class B: This class has about 101 heroes, our Saitama also stopped for a long time in this Class. In general, Class B heroes are quite strong compared to Class C, they are no longer required to do the aforementioned weekly hero activity, but in actual battles, Class B heroes usually do not take on the important role. . 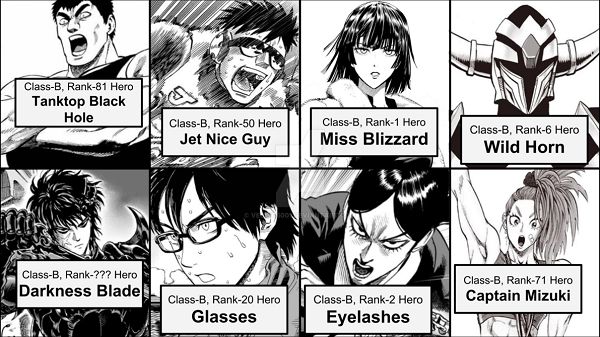 Class A: There were 37 individuals in this class, 38 in the past, but the number decreased after Tanktop Vegetarian withdrew after the clash with Garou. A rank hero, who is above all reasonable and powerful. We also have a few occasions to see heroes displaying the power of combat like the trio of students of the Samurai Atom. 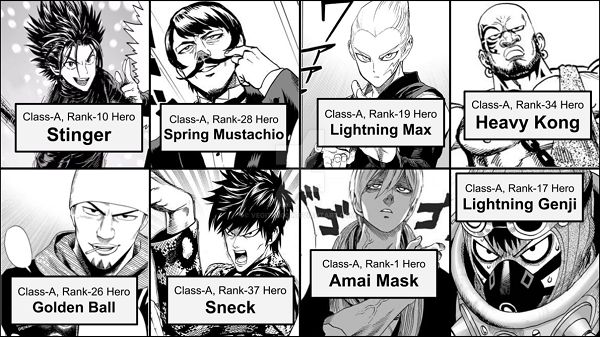 Class S: These 17 heroes are the first flag of the Association, each individually able to confront the Demon-class carpet. Thanks to the webcomic and through information from Flashy Flash, we know that initially this class did not exist, it was set up precisely to gather the most special combat warriors in the ranks of Super Heroes. 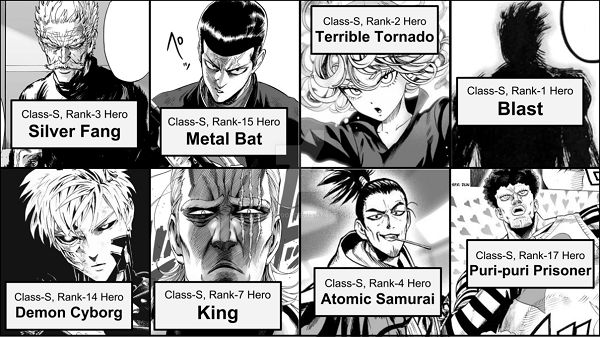 The rankings were established by the Hero Association itself, to classify heroes correctly, the heroes would take an entrance exam, divided into two, a physical exam and a written test. The results of the two tests determine what will be the starting point of the hero in the guild, but no matter what class they are assigned to, they always have to start from the last position of the class they are assigned to.

Once the starting position has been set in the ranking of the Association, just by performing heroic actions, the position of the hero will increase rapidly in the ranking. Upon reaching the first position of a class, it is possible to move on to the next position, but must pass an interview with an association committee. As far as the comic book mania knows, there’s only one exception to this gold standard: King, who doesn’t even have to take the test to become a hero, is directly rated as S rank.

Before moving on to the next plot, we need to clarify a bit about the power factor in One Punch Man, which is:

“Physical strength is judged on par with intellectual strength”

All manga, like Hunter x Hunter or Shingeki no Kyojin, are built on this principle. In addition to that, two of the top S rank heroes turned their intellectual prowess into powerful weapons, of course I’m referring to the Little Queen and the Metal Knight.